Two wings lift a person up from earthy concerns: simplicity and purity. Simplicity should be in intention, purity in feelings. Simplicity reaches out after God, purity catches hold and tastes. ~ Thomas A’Kempis 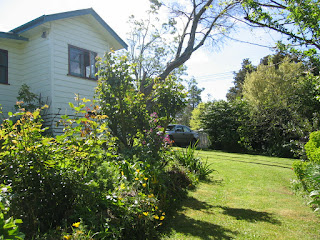 Hello.... I didn't think I was going to ever get this blog written because I've been so busy in the garden - tackling some major projects. and before I forget, I wanted to add this link to a wondeful New Zealand cooking show. Its set in the South Island of New Zealand (Central Otago), the area I grew up in and would spend holidays etc.   http://tvnz.co.nz/free-range-cook/recipes-group-3691722 Annabel is fabulous, a woman after my own heart and totally connected to the earth and her garden ..:0) 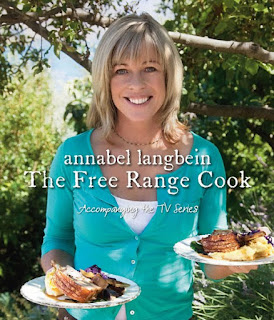 http://tvnz.co.nz/free-range-cook/s1-e11-video-3890127 a video of last nights show at the AMP show :0)
Check it out, you'll love it !
Here;s a cool NZ cookbook review site and talks about Annabels latest cookbooks. http://beattiesbookblog.blogspot.com/2010/09/free-range-cook-companion-cookbook-to.html

Other stuff: Already people are talking about Christmas, and on at least 2 seperate occasions people have asked me if my Christmas shopping is all done !!!!. I don't really start getting into preparations till at least December. There's not so much need now that the children have all grown. I'm looking forward to going to my daughter Katies for Christmas day. It'll be fun to plan and cook with her and get to see my little grandaughter Lily too. 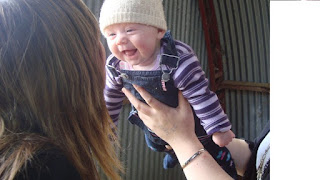 Little Lily on the dairy farm, in the cow shed (4 1/2 months old). Isn't she the cutest :0) She certainly won't be hard to shop for !!!
Now as for the garden, I have quite a few invasive plants that if I don't keep on top of, could literally take over and spread throughout the whole property. I'm talking about Ivy, Blackberry, Convovulus..and another creeper kind of thing, which I suspect is Old Mans Beard. It winds itself around trees and attaches itself with what looks like hariry tentacles. They seem to be glued on like cement !!! :0(. Over time, it takes over the host tree, suffocating it, & is impossible to remove....and eventually the tree needs to be removed. We don't get snow here in Central Hawkes Bay, so these creepers have opportunity to flourish all year round. Hence I've been gradually (over 3 years) hacking, weeding and pruning my way around the property and now a once dark, over grown garden, is finally starting to see the light. Hallelujah !

The Making of Raised Beds:
Where it all began in the vegetable garden. Each of the treated timber boxes are 1.5 metre square. Weed matting was laid at the base of each box and around the sides. 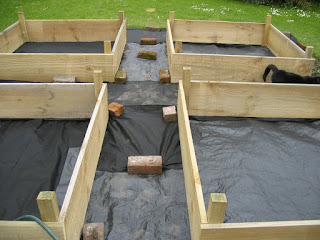 Black polythene plastic was stapled gunned inside to prevent any chemicals from the treated timber leaching into the organic compost, and also to preserve the wood longer. 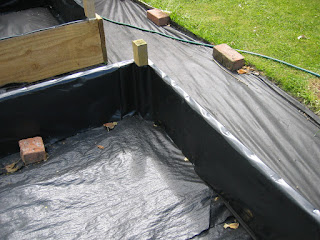 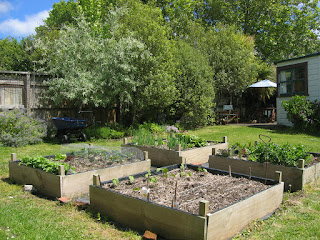 The raised bed vegetable garden and my amazing 3 wheeler wheelbarrow over yonder ..makes moving plants and weeds around a whole lot easier. I've planted beans, carrots, silverbeet (chard), various lettuces, some baby leeks, spring onions, celery and radishes. Over by the shed are some tomato plants (heirloom seed varieties and a black cherry tomato plant and some zucchini seeds have just sprouted in my propogator. At the garden centre, zucchini plants were $5.00 per plant, & their was no way I was paying that, when a whole pkt of seeds only cost $3.50, so much more economical. So far 3 plants are underway !!! already (after only 10 days). 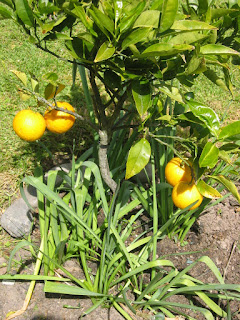 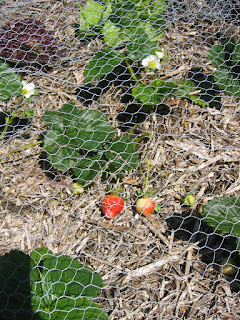 Strawberry plants beginning to ripen. I covered them over with netting, because the birds already were enjoying them before I could pick one !! 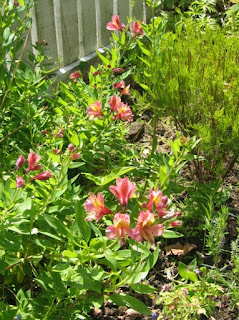 Pretty Alstrameria flowering out in the front garden. 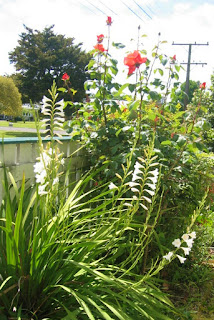 I've included a couple of recipes from some baking I've been doing latley...enjoy :0) 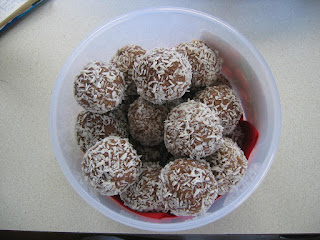 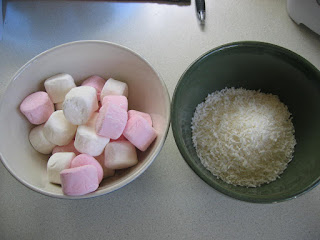 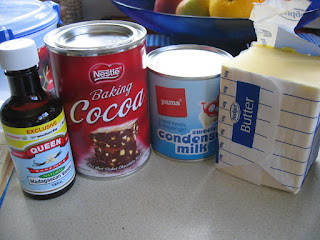 1. Mix the melted butter, condensed milk and vanilla together with a wire whick, until all combined. 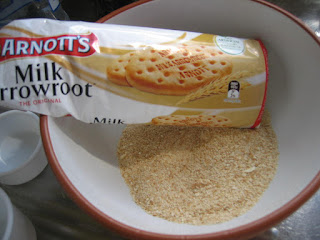 2. Add cocoa to crumbs and mix through, Pour buttery mixture in and mix well until it forms a dough 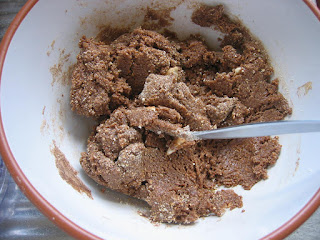 3. Take a large teaspoon of thie mixture and shape it round a marshmallow. 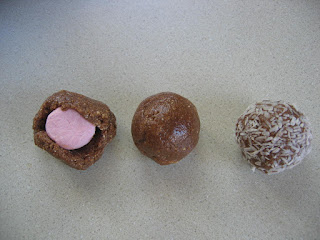 Roll into a ball shape and then into the coocnut, until coated.
4. Chill the marshmallow treats in the refrigerator in a covered container..enjoy :0)
. 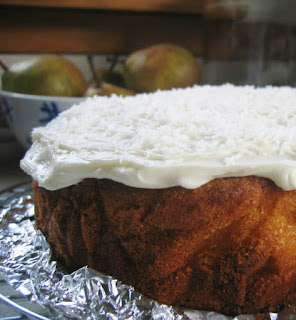 * ~ 'SPRING'S LEMON BUTTER CAKE' ~ *
A new summer dress and bottle of perfume, got  me in the summery mood....and lemon for some reason seems like a summer flavour. Maybe because of hmemade lemonade?.  Ayway the other day I had such a craving for this cake, that I went in search of the recipe. I used to make it  a long time ago when my children were small and as it makes a large cake,  I decided to halve itand it turned out great.  I hope someone will try it & let me know how it turns out.
Ingredients 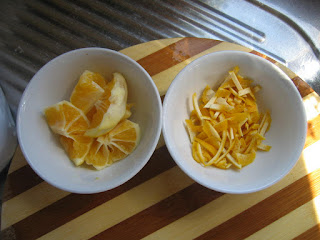 2. Using a food processor (I use a small one, it works best with this quantity), place the sugar, and lemon
rind in and pulse until finely chopped. Add the softened butter and and blend until the mixture is creamed. 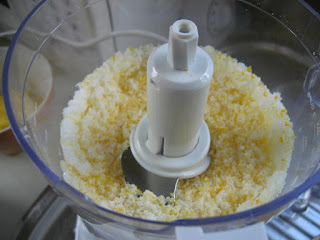 3. Add the eggs one at a time, pulsing well, then add the lemon segments. Pulse untill chopped fine.  Add the
milk, blend gently and then pour the mixture into a bowl. Gently fold in the flour - half a cup at a time. 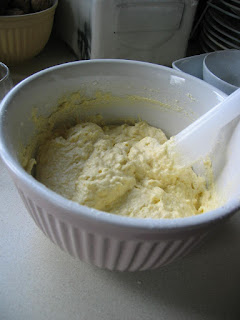 7. Spoon the ,mixture into a smallish round cake tin. I line mine with aluminum foil and then spray with
cooking spray...or use a non stick pan.
8. Bake at 170 C for about 40 minutes.
9. Cool on a rack and ice with desired icing. I used Betty Crockers Vanilla icing (because I love it), but a
cream cheese lemon or vanilla icing would also be lovely. 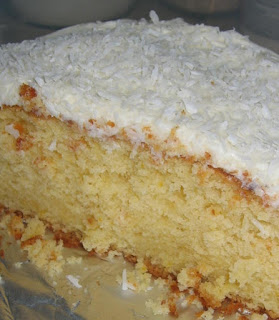 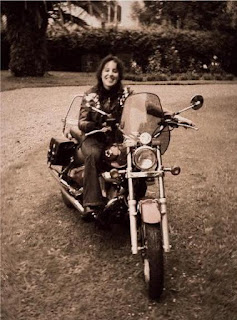 Hello friends, I just wanted to pop in here quick and share a couple of 'frugal living' things with you a recipe & an idea. The... 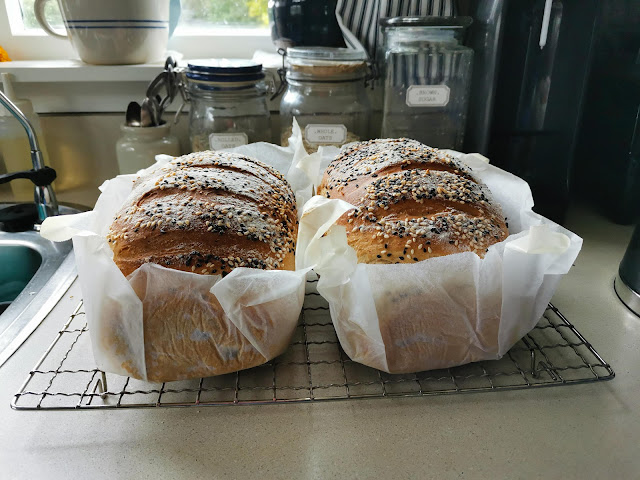 Linda
New Zealand
♥ Hi, my name is Linda. I live in an old villa in a small country town, with my dear husband of 37 years. I consider myself old fashioned as I take great joy in being a homemaker. I love the Lord, our beautiful family and our large messy garden. From it spring my other passions - soap making, herbs, cooking & preserving food. This is where I like to share it all. Please stay a while.

“Two wings lift a person up from earthy concerns: simplicity and purity. Simplicity should be in intention, purity in feelings. Simplicity reaches out after God, purity catches hold and tastes. ~ Thomas A’Kempis